The Role of the American Roulette

Nowadays American roulette is a very popular gambling adventure that is played in betting establishments both land-based and virtual worldwide. It is called the Queen of gambling games due to the grace of the gameplay and fascinating excitement that it brings.

But let us have a look back to the history of this particular hazard adventure. Much earlier in the 1800s the game of roulette travelled over the Atlantic Ocean and reached the United States with first immigrants and settlers. Some historians are sure that roulette game was introduced in New Orleans by Frenchman in the 19th century. Afterwards it spread all over the United States attracting more gamblers who cannot resist the charm of the roulette.

What is the difference between American and European roulette? 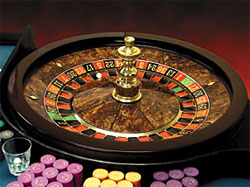 American roulette is a unique alternative among all roulette games as per the additional "00" (double zero) pocket on the wheel that provides higher casino advantage that comprises to 5.26%.

Frankly speaking, both roulette variations are very similar with each other, but there are few distinctive features of the American variant:

It should be emphasized that additional double zero option significantly influences on the odds in the long-run. Of course, it is worth trying but, on the other hand, it would be wiser to choose the European variant due to better odds (or even no zero roulette that has no roulette house edge).

By the way, gamblers can also experience European roulette in the US casinos and in Las Vegas. Thus the name American roulette does not mean that only this type of roulette is played all over in America. You can enjoy the range of roulette games on the territory of the United States including European, American, French, Royale roulette and other existing alternatives. Good luck in selecting the best appropriate roulette game variation!